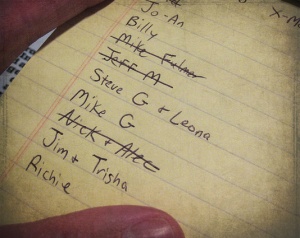 If you use an e-mail service to send newsletters or blasts, how did you build your list? If the answer is that you invited people or they added themselves via a form on your website, three cheers for you! No coal in your Christmas stocking.

Email is still one of the most powerful ways to connect with customers or prospects short of having coffee together, even if automated (because you can personalize it with the recipient’s name). You’re not competing with a stream of cat photos in Facebook or random Twitter chatter. It’s a great way to further your brand and personality, and become a go-to person in your field.

But you don’t want people scratching their heads when your third e-blast of the week arrives in their in-box, wondering if they forgot they signed up for your list.

There are three types of emails from businesses: total spam, almost spam and not spam. If you invited people to your list or they signed up (knowing what they were getting), that’s not spam.

We all know what total spam is.

Almost spam is everything else, such as adding people to your list, even people you know, even good friends, who might very well have said, “Yes, sign me up Scottie!” if only you’d asked.

But they can delete emails, right? Trust and respect rule here. The burden shouldn’t be on the recipient. Your goal is to inform, inspire and delight. It’s a sign of respect to ask permission to add someone to a list, even a client.

The only good method is a double-opt-in. Better to have a few true believers than the many annoyed because you didn’t seek permission. That’s why they call it permission marketing. Many companies, as stated in the fine print we don’t read, automatically add you to their list following a purchase. If you’re a huge company that’s to be expected. But for most of us, it’s best to take the trouble to ask. Or make it very transparent that they’re signing up as a way to build good will.

While I don’t get as giddy about your e-newsletter as I do when the Sunday New York Times lands on my front stoop, it’s still intimate, contained and gentle. But even the most scintillating e-newsletter is stuff in your inbox that must be tended to, which is why it’s bad for business to send them too often, lacking in good content or to people who didn’t sign up, or a combination of all three.

I’m of the mind that everyone has good advice to give if they’ve worked in their field long enough, which is why I’m not in favor of purely self-promotional e-newsletters. I give them a pass though, even those I never signed up for, if they’re infrequent enough, such as quarterly.

Can I add all my Facebook subscribers? Heavens no.

What about my mother? Ask first.

My best friend? See above.

So, ring in the new year with a kinder, gentler list that drives happy customers to your door and doesn’t drive other people away.